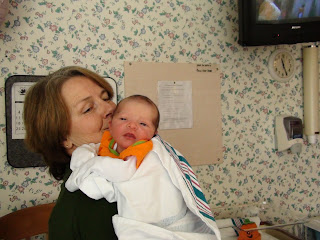 Going forward I will be posting lots of cool things on here. Hopefully I can get some time this weekend and post a few videos. One of the most special moments was Kimmie getting to meet her daughter for the first time. And what is also special is that I have it recorded on video and would like to post that on here for all to see.

Certainly there are now officially 7 million pictures and videos of Camryn so I will have to go through and hand-pick the very best ones and post them here (although I can say without any bias WHATSOEVER that there are NO bad pics or videos of Camryn). In the meantime, here is a picture of Grandma Burdick and Camryn on Halloween! This was the day Kimmie and Cammie were released from the hospital, and Camryn was given an awesome pumpkin Halloween costume to wear home. 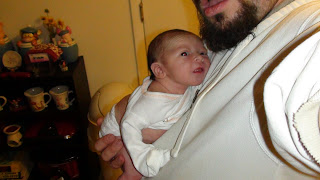 Oh and what the heck, here is another picture that you've probably already seen of Camryn (who I affectionately call Boobert The Chimp...usually just Boobert) after being burped by daddy...I just love this picture of her!!
Many more to come! Stay tuned!!
Posted by jbryanhopkins at 9:37 AM